Excerpt: A Tail for Two by Mara Wells

Are you read to enjoy a fun doggy focused romance novel? I hope so. Below you will find an excerpt and the opportunity to enter to win a print copy. Enjoy!

All paws on deck!

Carrie Burns has a successful business, a young son, Oliver, and an energetic Jack Russell terrier. She doesn't have time in her busy schedule for her ex-husband and his talk of working together again. But when she runs into Lance in the dog park, their lives are turned upside down.

Lance Donovan wants to promote his fledgling construction company by helping his brother Caleb with a big condo conversion. Lance even knows the perfect interior designer to make this project a success—his ex-wife, Carrie. But after a fateful meeting at the dog park, Lance finds himself not only petsitting both his brother's dog and the beloved Jack Russell terrier he had to leave behind in the divorce, but babysitting a young son he never knew he had while his ex-wife tries to get back into dating. How did life get this crazy?

Lance is determined to win back the love he thought he'd lost—but he's going to need a lot of help from his furry friends.

“What’s your secret, buddy?” Lance waited while Beckham sniffed the same plants he sniffed multiple times per day. “How do I feel so much older, but you’re still energetic as a puppy?”

“Between Oli and this one, I feel a hundred years old some days.” The confession was out before Carrie could edit it. Why not? It had been one long day of confessions, hadn’t it? What was one more?

Lance held open the front gate for her, winking at her as she passed through. “You don’t look a day over eighty-nine.”

“Thanks a lot.” She smacked his arm, then waited while Lance untangled the leash from around his leg. It was easy to lose track of Beckham, whirling dervish that he was. Once freed of Lance’s leg tangle, Beckham lunged ahead, straining on the lead enough to show how anxious he was to get going but not so hard that he choked himself.

“You got a hot date or something?” Lance said to the dog, letting him decide the direction. To the right. Carrie wasn’t surprised. There was a particular crepe myrtle that was especially snifferific. At least Beckham seemed to think so.

“He’s got a tight schedule.” Carrie lagged behind, enjoying not being the one dragged along for a change. “Places to go, people to smell.”

Lance chuckled at her lame joke. “Where do you usually go on a night walk? If Oli’s with you, I mean.”

“This time of night? We usually do a lap through the alley.”

“You walk through alleys late at night?” Lance tugged on the leash to slow Beckham down, the bulge of bicep keeping the dog in check and riveting Carrie’s attention. “That’s not safe.”

Carrie’s jaw tightened. Just because he was good at controlling her uncontrollable dog didn’t mean he got to control anything else about her life. They’d agreed to talk things out, not issue dictates to each other. “It’s fine. This is a nice neighborhood.”

“Bad things still happen in good neighborhoods.” So he was going to talk it out.

She sighed. “I don’t need you tell me how to be safe. I can take care of myself.”

Lance clamped his mouth shut, and not one second too soon, as far as Carrie was concerned. She had enough worries on her mind without adding fear of her own alley to the list. There were streetlights. She never took them out this late. Who was he to tell her what was safe or not in her own neighborhood?

She jumped at Lance’s touch on her arm.

“It’s fine. Though I could get used to this apology thing.” She should pull away. She didn’t. Instead, she compounded the problem by placing her hand over his. “We’ve been on our own a long time. You don’t need to worry about us.” Her fingers danced up his arm like they had a will of their own.

They’d stopped under a streetlight while Beckham thoroughly inspected the pole, leaving his mark for future dogs to ponder. Lance’s hand tightened on her arm. She took a step closer, those dancing fingers now caressing his shoulder. Her breath staggered in and out of her lungs. What was she doing?

“Do you want to be alone?” Lance’s question rumbled out of his chest. He used his grip on her arm to draw her closer.

Carrie tried to be honest with herself. As a single mother, she couldn’t afford delusion. She understood his question, could feel the familiar pull of him, like her very cells couldn’t stand to be separated from him for another moment. She wanted to blame muscle memory, her string of bad dates, that she was ovulating—something besides her own desire to press against Lance’s hard body and kiss him until they were both breathless.

“Do you?” she countered, not willing to put into words the feelings pounding through her. As much as they’d shared earlier, this wanting made her vulnerable, and that made her hesitate.

“No,” Lance rasped, placing a hand on her hip to draw her closer, erasing her hesitation with his touch.

“Me neither.” She closed the last bit of distance on a quick exhale, lifting her face to his.

She thought he would kiss her then, would pull her in for a kiss as hot and all-consuming as the one in the elevator, the one she’d replayed a hundred times in her mind. He didn’t. Instead, he cupped her head in his hands, his rough thumbs tracing her cheekbones with exquisite tenderness. Slowly, he smiled, right side hitching up that extra millimeter.

“Hi,” she whispered back, smiling. She stood on her tiptoes and reached up, lacing her fingers behind his head.

“I’m going to kiss you.” The smile tipped further to the right.

Lance’s eyes flashed, hungry and wild. The smile disappeared, and finally, finally, he kissed her. And she kissed him. Her laced fingers pulled his head down. He held her jaw in one hand while the other plowed through her hair. She leaned into him, forgetting they were on the street, illuminated by the streetlight. Forgetting Beckham, engrossed in the scents of the lamppost. Forgetting all the reasons why she and Lance would never work. She kissed him, and he kissed her back, and Carrie hadn’t felt anything this right in a very long time.

Her legs trembled from standing on tiptoe so long. Keeping her hold on Lance’s head, she pulled him toward her, keeping the kiss going as she lowered her heels. Then she felt something else, something squishy. They both smelled it, and Carrie broke the kiss with a grimace.

“Let me see.” Lance took a step back and twirled his finger for her to turn.

She lifted her foot. “Guess Beckham got tired of waiting for us.”

“In good news, we can head back to your place now. Right?”

She scraped her shoe on the edge of the sidewalk. “Right.”

“You are going to invite me in, right?” Lance scooped up the remains of Beckham’s gift with a bag from his own pocket.

It was such a bad idea. Carrie scraped and scraped. Life with a dog was often messy and kind of gross. Or maybe that was simply life. “Right.” 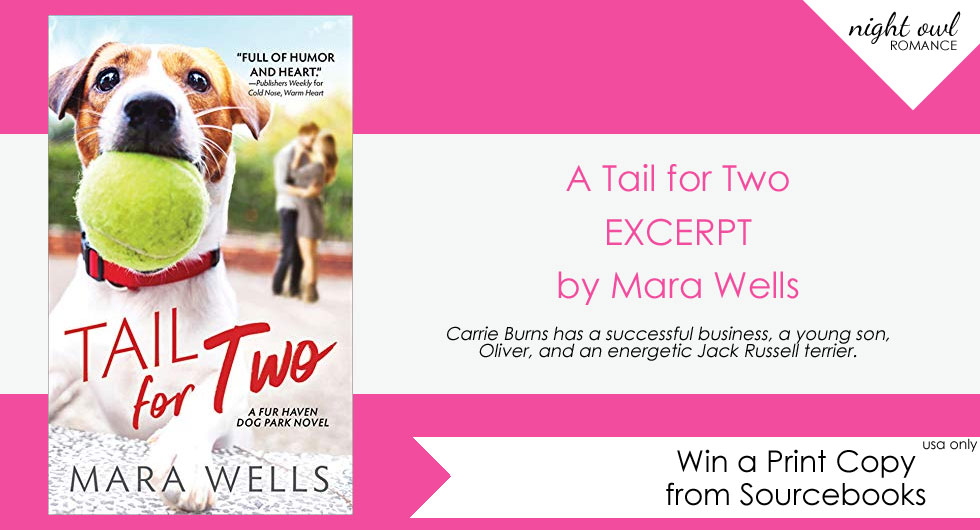