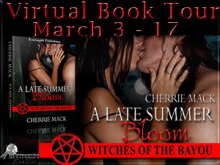 3 ecopies of A Late Summer Bloom

A Late Summer Bloom
Witches of the Bayou

A young witch, destined to be queen. A traveler destined to love her and an evil warlock desperate to claim her.

When Julien Beaumont meets Giselle Jareau, the naïve, young witch is nothing more than a nuisance. A mere inconvenience. But the inkblot on his arm disagrees. As their relationship develops, his tattoo begins to fill in. Could it be fate or something more sinister?

On an old, decrepit sugar plantation, in the heart of the Louisiana Bayou, the defender of the covens and the queen to the royals engage in a battle of wits. And as Giselle falls in love, Julien tries desperately to change the course of their destiny.

Cherrie Mack grew up in Flushing Queens NY, the youngest child of six. The city’s diversity gave her a great appreciation for many different cultures and lifestyles. After love finally claimed the girl from the city and dragged her to the suburban madness of Long Island, she settled into a quiet life with her new husband. Two children and one mini-van later, the family found themselves moving towards the sunny skies of Florida where they currently reside. With her focus still very much on her family, Cherrie squeezes in time to write. The publication of her debut novel, Ache of Desire has given her the confidence to allow her to spend more time writing.

One year and four books later, Cherrie has continued to flourish. With multiple series in the works, there’s no slowing down for this up and coming author.

A member of Romance Writers of America, Cherrie is slowly spreading her wings as a romance author. Look for her books at all digital bookstores such as Amazon, Barnes and Noble, Bookstrand, ITunes, Nook and many more.