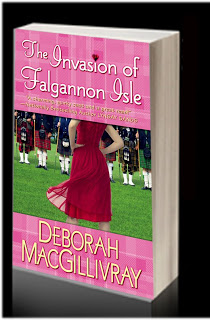 Just as knights have fascinated us, men in kilts keep ranking high on a woman's wish list. So can you imaging owning a teeny isle in Scotland where there is a curse, which says all the men of the island will never find love unless the lady of the island marries first? The delimna is further complicated when said woman cannot marry just anyone. She must fall in love with a man not of the isle, he must be black-headed, green-eyes and half-Irish! Single, on an island with 213 sexy Scotsmen, and not a one of them can pay her court!
B.A. Montgomerie owns this island. And while she sympathizes with the lads of Falgannon, she is in no hurry to get married again. She married a black-haired, half-Irisher seven years ago. The men were not happy because he had blue eyes! Widowed and unwilling to sacrifice herself, she hits upon putting up her bachelors on the web, hoping to draw brides to the tiny island. Surpisingly, when the ferry docks, there isn't a woman insight, but vikings!!! Falgannon Isle is being invaded for the first time in nearly 700 years. Only the viking horde (two men actually) is being led by one Des Mershan - who just happens to be -- yeppers -- black-headed, green-eyed and half-Irish. However, Des hasn't come to find love or break curses. He's come for vengeance.

It's up the lonely bachelors and The Cat Dudley to save the day, and see this match made in heaven unites on the peaty soil of Falgannon Isle.