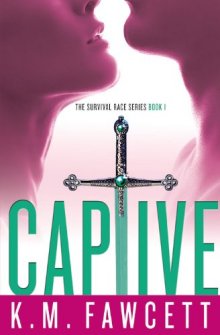 Thank you for having me at Night Owl Reviews. I’m thrilled to be here to talk about my debut novel, Captive.

What inspired you to write Science Fiction Romance?

I love the adventure and the wonder that a science fiction or fantasy element brings to a story. These types of movies and books have always excited me in ways that other stories didn’t. Plus, science is fun. As a kid in the ‘80s, I loved watching Mr. Wizard’s World. In school I enjoyed learning about astronomy, biology, and earth science…though I’ll admit I wasn’t a fan of chemistry class. As a writer there are so many “what ifs” to explore with science. CAPTIVE was inspired by the question, “What if humans were the pets of an alien race?” What if we were forced to breed and compete for their entertainment?

Why will readers connect with your heroine?

My heroine, Addy, is a loner tomboy abducted from Earth and forced into captivity. She wants her freedom, and will do everything possible to escape. I hope that like the hero, readers will be drawn to Addy’s strength and fighting spirit. And will root for her as she learns how to trust someone else and how to love.

Tell us about your Alpha Gladiator, Max. What makes him a lovable hero?

Max is a tortured hero. He is a brooding, dangerous, and mysterious alpha male with terrible secrets. After years of abuse and bloody survival races, he’s lost his humanity. He sees himself as a beast meant for killing and breeding...until he’s paired with a spirited woman who refuses to mate. Her fire and passion for freedom reawakens life inside him, yet he fears the Hyboreans will break her spirit like they broke his. In true romance-hero fashion, Max uses his wits and body to protect her as they escape. He teaches her how to survive, and she teaches him how to find the man inside the beast.

Where does your book take place?

The story begins on Earth as we follow Addy and her abduction to the bitter, arctic planet of Hyborea. There she is thrown into a room with a naked alpha gladiator stud, and is expected to breed warriors for the survival race. The room--called a breeding box--has no obvious doors, windows, or way out, but she is determined to break free or die trying.

The survival race is a blood sport where the last man alive wins. The competitors are challenged to utilize their strength, endurance, wits, survival skills, and combat skills to fight alien creatures, a harsh arctic environment, and each other. The Hyboreans love to gamble on which gladiator will reign victorious in the competition that could last days or weeks.

K.M. Fawcett was a born romantic. At six years old, she would beg her parents to take her to a restaurant with "soft music and candles" where she could drink Shirley Temples and twirl on the dance floor. As she grew, her desire to be whisked into a romantic adventure by a knight in shining armor also grew - to the point of annoying her friends and family. When she received A Knight In Shining Armor (a novel by Jude Deveraux) for her eighteenth birthday, she fell in love...with the romance genre.

Now K.M. writes sci-fi/ paranormal romances, and enjoys stories filled with adventure and strong, kick butt heroes and heroines. She is a member of the Romance Writers of America, the Fantasy, Futuristic and Paranormal Chapter of RWA, and the Liberty States Fiction Writers. She is represented by Michelle Grajkowski of the 3 Seas Literary Agency and writes for Grand Central Publishing's digital imprint, Forever Yours.

When not working on her novels, working out at the dojo, or blogging about martial arts and writing at Attacking the Page, she is home with her children and two cats.