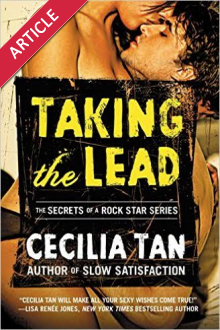 Night Owl Reviews asked me to tackle the question "what do you do when your characters put up a lot of walls?" Now's the perfect time to answer that because the heroine of my new romance, TAKING THE LEAD, puts up so many walls she ought to have a side job as a house contractor.

Ricki's got walls for lots of reasons. Her mother died when she was young. Her family legacy is riddled with secrets, including sex scandals, alcoholism, and more. Her early experiences with love and boyfriends haven't been great. And her greatest fear is that she'll lose everything she's worked for in the business world if anyone starts thinking she's a "slut." She cultivates an Ice Queen image to keep everyone at bay.

Axel, our hero, is a carefree playboy on top of the world, eager to savor all the fruits of success now that his band has made it big. But he doesn't want the groupies and other women throwing themselves at him. He wants to solve the puzzle of Ricki Hamilton.

Axel takes a multi-pronged approach (no pun intended) to getting through Ricki's walls of ice:

HEAT
Axel's most potent weapon is sex itself. He's a master seducer, leading Ricki into sweeter and sweeter temptations until she craves him.

HONESTY
Axel is incredibly open with Ricki. He'll tell her anything she wants to know about himself and he's always honest, especially about what he wants. Ricki almost has to be equally open or she'll seem rude.

CARING
When Ricki needs him, Axel doesn't hesitate to help. When she's upset over an incident, he's there to support her. When she needs someone to talk to, he's there to listen. When her shell shatters, he's there.

UNDERSTANDING
When Ricki tells him that a sex scandal could ruin her career, Axel doesn't try to tell her she's wrong. He tries to understand her point of view. When Ricki discovers he doesn't argue the point, she is more inclined to keep him around...until she can decide for herself whether love is worth the risk to career.

PERSISTENCE
Axel never gives up on trying to get through to Ricki. Even when she tries to push him away, or runs away herself, Axel is patient. Some breakthroughs are big, others are small and gradual.

COOPERATION
When necessary, Axel brings in help. Ricki's best friend is an ally with access to Ricki's deepest fears and secrets. Axel isn't too proud to ask for some help when it's needed.

SEX
It's not only about the seduction, about getting to yes. Once Axel does break through it's up to him to make the sex itself so good that Ricki will think twice before putting up those walls again. Ultimately that's why sex has to come before love: love can't blossom until the ice melts.

Taking the Lead - Secrets of a Rock Star

When the rich and famous come out to play, nothing is off-limits . . .

Everyone knows Ricki Hamilton as the icy heiress living in a billion-dollar mansion, high up in the Hollywood Hills. But few realize that behind the gilded gates, Ricki is the mistress of LA's most exclusive private club. A place where no fantasy is forbidden and no one goes unsatisfied-except for Ricki. If she had her way, she'd leave the business behind . . . until she meets the one man with the power to change her mind.

The hottest rock star in the world, Axel Hawke, has the requisite sexy look and bad-boy reputation. Yet even his biggest fans have no clue just how decadently dangerous he can be. From the moment he meets Ricki, he knows there is no other woman who will satisfy him. He can feel the heat hiding beneath her cool demeanor and he's determined to stoke her flame.

Together Ricki and Axel indulge their every desire. The deeper they go, the more she craves. Submitting to Axel opens her eyes, and for the first time Ricki knows exactly what she wants. All she has to do is take it . . .

"Okay, where were we?" Sakura drank a bit more of the sake. "Last time I'm going to say this: if Axel did anything sketchy, beyond carrying you off for a lark, anything that violated the rules of consent, then his name is mud in the BDSM community and you definitely shouldn't be inviting him to join your club. But nothing you've told me so far really sounds all that sketchy. He carried you off, you willingly had some light role play and heavy sex; you played the submissive role and had, if I'm not mistaken, some of the best sex in your life. And that's why you're upset."

"Because the sex was good?"

"Because you discovered that letting someone else be in charge is a turn-on for you. Ricki, let me assure you, being submissive in the bedroom isn't the same thing as being subservient or second-class to the pushy men in your life."

I dug in my heels. "That's easy for you to say because you're dominant."

She sighed. "The other thing is, really, if something's going on in your head, it's probably got more to do with you than with him. The way to straighten it out is to talk it out with him. Axel may be fairly new to serious dom role play but I know for a fact that he knows about aftercare."

Aftercare. I huffed. He'd tried to take care of me and I'd kicked him out. Sakura was making sense but I couldn't quite put it all together in my mind. It was a lot to take in at once. "Okay, I confess. The thing is, when I'm near him? All common sense flies out the window, Sarah. I literally can't get together with him to talk about this without melting into a puddle."

"Ahhh." She seemed to think that explained a lot. "Well. Have you tried calling him?"

"Of course I haven't. I don't even have his number."

"Yes, you do." She gave me a sly, knowing smile. "I programmed it into your phone before I gave it back."

"You sneaky thing!" I pulled my phone out to see if what she said was true: sure enough, there was an Axel Hawke in my contacts now.

There was also a text from Paul. Schmitt's pressing me to schedule an appointment with you, his message read. Y/N?

"Tell him he can have an appointment with me after he gives me a slot to address the CTC board of directors," I said aloud.

Sakura sipped her tea. "Huh. Speaking of pushy men in your life. Schmitt?"

"How did you guess?" He couldn't want to talk about the upcoming kinky dungeon party. He'd want to meet with both me and Gwen for that. "I have no clue what he wants now. I guess I have to meet with him to find out."

"Don't be silly. Have Paul get an agenda from him. No agenda, no meeting. If the items are too sensitive to put on an agenda, well, that gives you the answer in another way."

"What are you talking about? I'm already Queen Bitch of the Universe twenty-four-seven these days and I'm tired of it, Sarah."

"Tsk tsk. I didn't say bitch. You do pretty well with your staff; I've seen it. You're firm, fair, but very definitely in charge and demanding your due."

"But they're my employees. Of course I can be all leader-like with them."

"And I'm telling you, act like that with these executives and lawyers in the club or they're going to treat you like Cy's little girl forever." She set her sake cup down. "You're afraid that being a sub in the bedroom means you'll be submissive to these jerks, too? Don't let it happen. I don't care that they're three times your age. You can buy and sell every one of them. Act like it."

"Drop the ice and just think queen. Think: crown on your head." She pointed to the top of her own head where a tiara would go and I felt myself sitting up straighter without even trying. "Demand their respect and you'll get it, Ricki. Axel already respects you a hundred times more than these assholes."

I tried to imagine what getting on the phone with him would be like. Part of me longed to hear his voice again. But what exactly did I want to say to him? Could I make him understand the reasons why I couldn't be with him? Could I make him understand what was going on in my life? "I just don't know, Sar'. What do you say to a guy who's turned your whole world upside down?"

The door slid aside and there was our waiter with a gigantic wooden tray shaped like a boat in his hands, well laden with a display of fish as colorful and gorgeous as a jewelry display at Tiffany's. He sailed it onto our table, gave us another smile, and then retreated again. The arrival of such a feast distracted us completely from the fact that Sarah never answered my question.