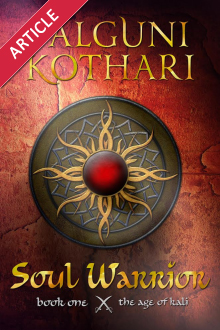 I was born and raised in Mumbai and have lived in the United States only since the turn of the millennium, which means the terms “diverse books” and “diverse authors” mean something entirely different to me.

I grew up reading Enid Blyton, Sir Arthur Conan Doyle, Agatha Christie, Shakespeare and Jane Austen as part of my diverse school curriculum or at-home pleasure reading. Such authors and their books—and let’s not forget Archie comics, Asterix, Tin Tin and Cowboy Mills and Boons—were my windows into the western world of snow and orphaned Christmases, French sleuths and tonnish ball gowns.

Alongside these “foreign” or culturally diverse books, I also read (again, both in and out of school) a wide selection of Indian authors like Anita Desai, Tagore, R.K. Narayan, Shobhaa De, Arundhati Roy and an insane amount of Indian comic books (Amar Chitra Kathas)—which were my mirror or reflections into identity. India has a long history of great literature, so there was an amazing selection to choose from. Most of the Indian authors I read wrote in English. (Thank God!) But some didn’t, and if it hadn’t been for my parents, I’d never have found the Indian language books that have inspired me to write the kind of books I write in English.

I come by my love of words honestly. My parents are voracious readers. My father reads exclusively in Gujarati—our mother tongue. Often, if he loved a book and thought I’d love it too, he’d look for the English translation for me because while I speak Gujarati fluently enough, I can’t read it to save myself. Sometimes, there were no translations available. In such cases, instead of depriving me of that great piece of writing, my parents would read the story out loud to me. My grandmother did that too, and at her knee I lapped up stories of gods and demons, princesses and pirates, Ali Baba and the Forty Thieves, and how Scheherazade saved herself from execution in One Thousand and One Nights.

Fortunately, author Kaajal Oza-Vaidya’s Krishna: The God Who lived as Man has been translated into English by Bhawana Somaaya. This book brings a human, tragically vulnerable twist to the classic myth of the Hindu God, Krishna, who is known as the “kingmaker” of epic India. Everything I’d read about Lord Krishna until then had been pigeonholed into religion, mythology, politics and a pseudo-history of India. This story had none of that. This story was about the great loves of his life, and how he’d failed them all, even as he brought mankind to victory against a purported evil. It shocked me to realize that the same story could be told from an entirely different perspective (historical/political vs romance) if an author simply applied imagination.

Another translated work that has inspired me to write my mythic fantasy, Soul Warrior, is Mrityanjaya, the Death Conqueror: the story of Karna by Shivaji Sawant. I’ll be the first to admit it’s a terrible English translation, but I believe the original Marathi version of the book is simply divine. It took me some months, and many phone calls to independent bookstores in India, to get my hands on this book—this was many years ago, during the pre-Amazon era—but I managed to get it through a friend of a friend.

What I’m getting at is that diverse books are important. Diverse perspectives are important. Books are the windows and the mirror through which we see the world. And the more windows that are open, the larger our reflection grows. That can’t be a bad thing, can it? Discovering diverse books and writers from across oceans may be difficult, but it’s not impossible. And it is worth it.

A small sample of books and authors that inspire me as a reader and a writer:

Song of Ice and Fire by George R R Martin

The Palace of Illusions by Chitra Divakaruni

The Twentieth Wife by Indu Sundaresan

The Throne of the Crescent Moon by Saladin Ahmed

Such a Dance by Kate McMurray

And of course, all books in the Mills and Boon Indian Author collection, including mine—Bootie and the Beast.

Fight fate, or succumb to destiny?

In the dark Age of Kali, the Soul Warrior alone stands guard over the Human Realm, protecting its denizens from evil-willed asuras or demons. When a trick of fate appoints him guru to a motley crew of godlings, he agrees to train them as demon hunters against his better judgment. Suddenly, Lord Karna is not only battling the usual asuras with sinister agendas, but also rebellious students and a fault-ridden past.

Spanning the cosmic realms of mythic India, here is a tale of a band of supernatural warriors who come together over a singular purpose: the salvation of Karna’s secret child.

CHAPTER ONE
PRALAYA: THE CATACLYSM

Asht Dveep, off the coast of Madh Island, North Mumbai.

“We have visitors, my lord.”

Karna paused perusing the Times of India on his tablet, and cocked a brow at Lavya. Pale and lean, his friend and housemate loomed just inside the door to the den, hands folded in a neat Namaste. Irritated, but not at the interruption, Karna sighed, wondering why he bothered reading the news at all. Daily bulletins had become standard—or substandard, depending on one’s viewpoint. Climate change, economic disasters, terrors and terrorists all held front-page positions, every fugging day.

And what else could one expect in the Age of Kali? It was the age of sin, tsunamis and stock options in this currency-ruled realm. Not that the Gods had ever—not once in his almost eight-thousand-year career as humanity’s soul guardian—asked him to interfere with, subvert or reverse any of the realm’s natural or man-made calamities. His duty required only that he keep the world free of supernatural evil.

Karna stretched, his spine separating from the fiberglass chair like Velcro ripping. He was shirtless to battle the unrelenting October heat and though he’d queued up his sun-bleached, shoulder-length mane, sweat dampened his forehead, nape, armpits and back.

And therein lay the rub, he thought, coming back to the dos and don’ts of his duties. Being “asked” not to meddle in human affairs only made him more determined to help the helpless. At times, he managed to contain the disasters, and all was well in the Cosmos. But sometimes, his actions worsened the fate of the mortals, as well as his own. Like when he’d tried to repair the deficient ozone layer with his god-powers a couple of years ago.

Blasting the stratosphere with a load of solar radiation to augment the emissions from his godsire’s Celestial abode had been a solid, scientifically vetted idea. The extra UV rays he’d discharged from his fingertips had accelerated ozone production, and for a while he’d believed the crisis slowed, if not solved. But the hyper-paced oxygen cycle had also amplified energy output, creating miscreant solar flares, a couple of which had whipped across the Cosmos and breached the lower regions of the Higher Worlds.

Needless to say, the atmospheric fireworks hadn’t amused the Celestials or Heaven’s ruling Council. And as punishment for his hubris, Karna had been saddled with an annoying quirk—his body temperature was now directly proportional to his emotions—specifically, high-voltage anger. And stoicism did not come naturally to him.

“Whoever it is, tell them I’m indisposed,” he said, turning back to the tablet to scan a news report about a recent grisly murder near Hyderabad. He wondered if asuras were involved.

Protecting the Human Realm from the demon race was a fulltime, energy-sucking occupation. He just wasn’t in the mood for idle chitchat, heavenly politics or an unasked-for performance report. And from the surging energy levels he sensed wafting out of the living room, one or all three outcomes were assured as his visitors were definitely from the Higher Worlds. The heightened electromagnetic pulse wasn’t the sole indication of uninvited Celestial company—his friend and aide my-lorded him only when heavenly protocol needed to be followed.

“I doubt the excuse will fly with the Patriarchs or the Matriarchs,” said Lavya, coming to stand on the other side of the massive black onyx desk dominating the chamber.

Karna went rigid with shock when he heard who his visitors were. The entire Council gracing the Human Realm all at once was highly unusual. Not just unusual—it spelled cataclysmic.

Falguni Kothari is a New York-based hybrid author, and an amateur Latin and Ballroom dance silver medalist with a semi-professional background in Indian Classical dance. She writes in a variety of genres sewn together by the colorful and cultural threads of her South Asian heritage and expat experiences. She's published in India in contemporary fiction with global e-book availability, and will launch her mythic fantasy series, The Age of Kali, in November of 2015. When not writing or dancing or being house-wifey, she fools around on all manner of social media, and loves to connect with readers.