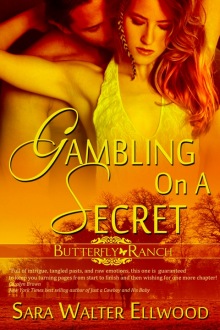 Sara Walter Ellwood on What’s Luck Have to Do with It?

Comment to win a variety of prizes listed below! One Day Contest (1/11/2013) for this blog post, plus full tour GRAND PRIZES to be given away on 3/1/2013. Comment on this post to be entered for the daily prize and click HERE for the GRAND PRIZE ENTRY.

This Posts Contest Entry Info - Comment to win a Gambling On A Secret ebook or a piece of custom jewelry! One winner for each item will be selected by the author. Ends - 1/11/2013

Gambling On A Secret is the book that almost wasn’t. Well, at least it almost wasn’t published when it was. This book had a long history—of sitting on an agent’s desk. Two years ago, I was signed with an agent. The then titled “Butterfly” was the second book I’d sent to her. She praised the book. Told me she loved the story... But she didn’t do anything with it.

I left the agent and took the rights of my books back. But I was discouraged. I feared something was majorly wrong with the story. After all, if it were a good story, she would have tried to sell it, right?

Then last February, my dear friend D’Ann Lindun hosted a pitch session with executive editor at Lyrical Press, Piper Denna. D’Ann begged me for about a week to pitch something. I kept telling her I didn’t have anything. The book that eventually became Heartstings (releasing April 2013 from Lyrical Press) was being considered by an editor at my other publisher—The Wild Rose Press. And “Butterfly” was a mess. It needed rewritten, and I really had lost my hope for this book.

After about the third email from D’Ann, I started to consider pitching “Butterfly”. This was the book of my heart, and I couldn’t believe it didn’t have a home. Besides, what did I have to lose? So, on the morning of the pitch session before I ran out the door for work, I logged into D’Ann’s blog and tossed up this pitch in less than a couple of minutes:

“When a mysterious runaway-turned-heiress trusts a drunk ex-soldier to rebuild her ranch, an entire town is shaken to its core as more secrets than just hers are revealed."

Yep. That was it. Short and simple. I’d written the high concept line in a class I’d taken awhile back and simply copied and pasted it in the blog. I went to work and forgot about it.

Later that day, I checked my email. D’Ann announced that I got a request for a partial. I was thrilled, but now I had to go to work. Over the next few days, I rewrote the first three chapters—the first 90 pages of the book. Thank God, Piper hadn’t wanted the whole book. It needed completely revised before I’d ever let an editor see it. I sent off the partial with the rewritten synopsis and waited. I then went to work on the rest of the book. I eventually got a request for a full, and within two weeks after submitting, I got a contract offer.

I was shocked and totally stoked. Although my old agent had said she loved the book, she never sent it out anywhere. Piper is the only editor to ever read the story. Getting a contract the first time out of the shoot is rare. And very lucky.

I feel Gambling On A Secret is my lucky charm. Even the premise for the story came to me completely by luck—if I hadn’t been watering flowers the morning a butterfly hatched from its cocoon, I may never have come up with this emotional story of changing your life around—of changing the ugly into something beautiful—to use a line from the heroine, Charli.

I won’t even go into the luck involved at getting a bestselling author to read your debut book and offer an amazing cover quote. I’m still thanking the stars over that one. Then she named my book among some of the biggest names in western romance as being one of her favorites in 2012.

Here’s the last freaky thing. I’ve always pictured the hero, Dylan, resembling cover model Jimmy Thomas. I’ll never forget my shock the first time I saw the cover—especially after someone pointed out that Jimmy Thomas is on my cover! And no, I didn’t tell the cover artist that’s who I pictured as Dylan—actually it never crossed my mind to make the suggestion. But the artist’s vision for Dylan wasn’t the only surprise. The female model is exactly how I envisioned Charli—skimpy, lacy top, pouty lips and all.

Now, how lucky is that? 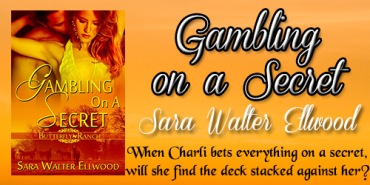 When Charli bets everything on a secret, will she find the deck stacked against her?

Former runaway-turned heiress Charli Monroe is hiding her sordid past and planning a future in Colton, Texas. Attending the local college for a degree in social work, she intends to raise cattle on her newly purchased ranch, which she plans to open as a home for troubled teens. Only a few glitches—the Victorian mansion is crumbling, the barn needs a roof, and her oilman neighbor wants more than friendship. When she meets Dylan Quinn, Charli is willing to take a chance on the town drunk to help her rebuild the rundown ranch.

Dylan has his demons, too. The former Special Forces commander can’t get past his ex-wife’s betrayal and the botched mission that left him with much more than a bad limp. Certain the greedy oilman next door to Charli wants much more than just her heart, Dylan’s even willing to stop drinking in order to protect her.

When things get dangerous and secrets of the past are revealed, is he only looking out for his new employer, or is she the new start he so desperately needs?

COVER QUOTE: “Full of intrigue, tangled pasts, and raw emotions, this one is guaranteed to keep you turning pages from start to finish and then wishing for one more chapter!” ~ Carolyn Brown, New York Times bestselling author of Just a Cowboy and His Baby.

“Ferguson, what are you doing here?” Dylan barked.

Leon ambled toward them on the stone path. “I’m saving a young maiden from torment. What are you doing here, playing the part of the devil?”

“I’m Miss Monroe’s new manager.” The deadly edge of his voice matched the flintiness of his eyes. “If there’s anyone to save the young maiden from, it’s you.”

“Mr. Quinn, please.” She turned to Leon. “Leon, is there something I can do for you?”

He smiled, showing off perfect white teeth in a face handsome enough to belong to an actor. “I was just passing by on my way home and decided to stop. How are the boys working out?”

Dylan’s stance widened and his hands flexed at his slides. “What boys?”

“Charli and I have entered into a business arrangement.”

She lost the battle with the urge to wrap her arms around herself. As much as she appreciated Leon’s kindness, respected him, and was even a little attracted to him, something about him didn’t sit right with her. He represented her peers in the community. According to Mrs. Pratt, besides the Cartwrights, she and Leon were undoubtedly the wealthiest residents in the county. No one in Colton could learn about her past. It would ruin her, and Leon, no doubt, had the means to dig up the dirt.

“Really?” Dylan stepped closer to her in a protective manner. Whiskey tainted his breath as the warmth of the exhalations tickled her cheek. “What kind of business arrangement?”

She could protect herself. Dylan Quinn wasn’t any safer than Leon Ferguson. Stepping away from him, she forced her arms to her sides. “Mr. Quinn, I can handle this.”

She faced Leon. “I’m amazed by how much the men got done since starting on Monday. The foreman told me last evening they’d be reseeding another fifty acres for hay this morning. And they have the corrals fixed and started on the fencing in the north pasture.”

“Good, good.” He glanced at Dylan. “I’ll be going, unless you need a more reliable exterminator. I couldn’t help but overhear about your snake infestation. I can give you the name of the company that has gotten rid of the snakes in our lakes over on Oak Springs for years.”

Although he presented the perfect solution, she didn’t the like way Leon had looked at Dylan as he said the word exterminator. “No, Mr. Quinn is quite capable of getting rid of the snake.”

“Oh, I’m sure he is.” Leon tipped his hat. “Let me know if there’s anything else I can do for you, Charli.” Dylan’s jaw tightened as his uncle glanced at him. “It’s good to see you up among the living again.”

Leon headed back to his Porsche. With no pretense of lowering his voice, Dylan said, “Now, there’s a snake no one wants in their garden.”

Upon hearing the jibe, Leon’s shoulders jerked in mid-stride.

Rattled by Leon’s attention and the snake fiasco, she turned on Dylan. “You aren’t off the hook. I want those snakes gone.”

“I hate snakes.” She shuddered and put her hands on her hips. “Maybe I should have asked him who the exterminator is.”

~One commenter from each stop will win a piece of custom jewelry.

(The winners of these two prizes will be announced the day after the tour stop.)

I also have 2 Grand Prizes!

~First Grand Prize is a SWAG PACK, including a signed copy of Carolyn Brown’s Just a Cowboy and His Baby. Also included is a copy of D’Ann Lindun’s Shot Through the Heart, a pen, a notebook, a horse themed mini calendar, a patriotic themed day planner, and more all tucked away in a reusable tote bag at the end of my blog tour.

~Second Grand Prize is a $10 Gift Card to either Amazon or Barnes and Noble. If you follow the tour and comment as often as possible, you increase your chances of winning!

(The winners of the Swag Pack and Gift Card will be announced on March 1, 2013.)

(Swag Pack is only eligible for US residents to win. The jewelry and gift card are eligible to US and Canada residents only. The ebook is eligible to anyone, unless prohibited by law.)

Sara Walter Ellwood is an award winning author whose novel Gambling On A Secret was named by bestselling author Carolyn Brown in the Happy Ever After Blog on USA Today as one of her favorite romances of 2012. Although Sara has long ago left the farm for the glamour of the big town, she draws on her experiences growing up on a small hobby farm in West Central Pennsylvania to write her stories. She’s been married to her college sweetheart for nearly 20 years, and they have two teenagers and one very spoiled rescue cat named Penny. She longs to visit the places she writes about and jokes she’s a cowgirl at heart stuck in Pennsylvania suburbia.