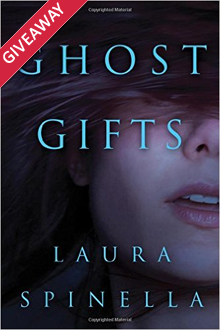 Ghost Gifts is the story of Aubrey Ellis, a woman haunted by her psychic abilities. It drove her father mad. It disrupted her childhood and destroyed her marriage. Just as Aubrey finds contentment as the real estate writer for the local newspaper, she is thrown into a decades old murder mystery. But mystery quickly turns into a present day thriller when reporter Levi St John arrives on the scene, determined to find the answers.

There are a lot of layers to Ghost Gifts—suspense, paranormal, mystery and, of course, romance. If the elements blend seamlessly, it wasn’t without trial and error, which equates to revision, revision, revision. I like novels with multiple threads—mostly, when writing, I like figuring out how all those threads come together, weaving into a singular plot. Sometimes the most minor mention of a character or event can lend a hand later—this happens multiple times in Ghost Gifts. You can’t plan for those opportunities, but you feel awfully good about them when they fall into place.

Romance was the non-negotiable component in Ghost Gifts, so that’s where I started. Aubrey and Levi have extensive yet very different backgrounds—or so it appears to the reader for a good portion of the novel. I knew their romance would be a long, slow burn, which was actually helpful to the overall plot. They’re very much at odds when the novel begins. The mystery/thriller pieces of the story give them an interesting backdrop for getting to know one another, first as colleagues, then as friends. One of my favorite comments came from my critique partner, when Ghosts Gifts was no more than a shaky draft: “Aubrey and Levi; their love story seems completely hopeless. Yet it evolves so naturally, and before you know it, you’re rooting for them!

Even though readers know they’ve picked up a romance, I think that a well told one should still come as a surprise. In terms of the rest of the story, eventually we learn what, besides current events and logistics lead Levi and Aubrey to the same place.

Of course logistics guide the novel, the hands-on reporting of what happened to Missy Flannigan, our Ghost Gifts victim. Crafting the murder mystery was the part of the novel I found most compelling: developing Missy, Frank and Dustin’s characters and simply deciding how Missy’s death played out twenty years ago. The back and forth timeline is constructed so readers learn, in tandem, what Aubrey and Levi discover in present day Surrey. I didn’t overthink this part, but tried to let it grow organically out of the present day plot—just as any newspaper investigation would. Blending all of the components was two parts craft, one part mechanics, and one part sheer determination. I knew I was juggling a lot with this story, so it was imperative that all elements from the past eventually made an appearance in the present. That almost gave me a sort of checklist, which was helpful.

As for inspiration, Ghost Gifts can’t be attributed to any one thing. From a writing standpoint, I’m a longtime Jodi Picoult fan. For years I was fascinated by her ability to write in so many layers. Her stories are more about the human condition, but I garnered a good bit of knowledge about how to craft a multidimensional plot. I also read a few a thrillers in the span of a year, so perhaps that motivated me as well.

Mostly, real life and real ghosts inspired this novel. I actually had Aubrey’s job as a home portrait writer for a number of years. While I don’t claim any psychic abilities, there are scenes in Ghost Gifts that came directly from some of my more curious house visits. I also live in a 125-year old house. During the writing of Ghost Gifts, I discovered some incredible circa 1900 photos of the house, along with information about the original owner—a woman named Anna Rathbun. It turned out she was an artist and writer. I can’t say for sure, but if a spirit can inspire a novel, I believe Miss Rathbun had her say.

All Aubrey Ellis wants is a normal life, one that doesn’t include desperate pleas from the dead. Her remarkable gift may help others rest in peace, but it also made for an unsettling childhood and destroyed her marriage. Finally content as the real estate writer for a local newspaper, Aubrey keeps her extraordinary ability hidden—until she is unexpectedly assigned the story of a decades-old murder.

Rocked by the discovery of a young woman’s skeletal remains, the New England town of Surrey wants answers. Hard-nosed investigative reporter Levi St John is determined to get them. Aubrey has no choice but to get involved, even at the terrifying risk of stirring spirits connected to a dead woman’s demise and piquing her new reporting partner’s suspicions.

As Aubrey and Levi delve further into the mystery, secrets are revealed and passion ignites. It seems that Aubrey’s ghost gifts are poised to deliver everything but a normal life.

Laura Spinella is an East Coast author, originally from Long Island, New York. She pursued her undergraduate degree in journalism at the University of Georgia. The southern locale provided the inspiration for her first novel, Beautiful Disaster, which garnered multiple awards, including a Romance Writers of America RITA nomination. She’s also lived on Maryland’s Eastern Shore and in North Carolina before relocating to Massachusetts. She and her family currently live in the Boston area, where she is always writing her next book. Ghost Gifts is Laura’s third work of romantic fiction. She also writes sensual romance under the pen name L. J. Wilson. Visit her website at www.lauraspinella.net.