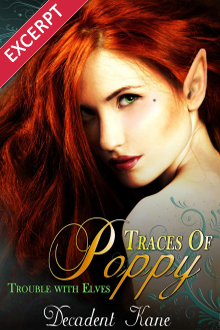 Deleted scenes and sentences always happen during my revision process. Mainly because the first draft...is exactly that...a draft of the story. While revising, I find new ways to say something, or find a scene that no longer fits the story or character, thus creating deleted content. As a reader I'm always interested in what other authors delete. My curious nature even has me seek out stuff like this from my favorite authors.

I deleted this content, not because I didn't like it, but because I found a way to say it better. It originally had been inserted into Chapter 2. Then I switched Chapter 1 & Chapter 2, and as I revised this little nugget no longer held the value I needed. The reason I switch chapter 1 & 2 was because I needed a better starting point, and while Drayden handles himself well, the story focuses more on Poppy.

I kept it so I could share it with my readers and here it is... Feel free to tell me what you think in the comments.

Poppy didn't know when it happened exactly, but at some point in the last month she must have sensed him nearer. He could be anyone she had bumped into and didn't know or recognize. Or he could just be in her area. While she could sense him in her dreams, she couldn't sense him awake to seek him out. If she were lucky she would happen by and she would know him upon eye contact...as eyes are the windows to the soul- their souls would touch if only for an instant.

This is actually the only true deleted part of Poppy's story. I added more than I took out, after some great Beta Reader feedback and an awesome editor. The story had jumped starting out about 15k and ending at 17k words. I sometimes think taking parts out and revising is harder than adding parts in and revising. Though I suppose that is based on author preference. Which do you think would be easier- adding or deleting?

Traces of Poppy - The Trouble with Elves, #6

Fate may take her life, but he will steal her soul.

Madness stalks Poppy’s dreams, drowning her in darkness, pain, and the fires of hell. Hoping the nightmares can be tamed, she seeks help from a sage witch, only to discover a crueler fate: she is bound to die. The elementals require her sacrifice, or they will end her bloodline forever. The worst part? She just found him...

The elf who is destined for her.
The male who will go mad without her.
The mate she can’t have.

Drayden knows the feral has him. He's turning into a drow faster than he thought possible. Rage and chaos consume him from the inside out, threatening to devour not only him, but his soul mate as well. She fears him, and yet she is the only one who can save him from his nightmare…

If they can survive the sage witch’s treacherous task.
If he can hold onto his soul a little longer.
If he can watch her die.

Drayden threw his arms up in frustration. How was he ever going to get her hair if he kept scaring her away? He sniffed the air and followed the smell of blood. In a blink, he was right behind her. Another blink, and he stopped in front of the female. "I can smell your blood. No use running. Or hiding, for that matter."

She backpedalled and headed for a tree. He blinked again, blocking her off. Her breathing came fast and hard. Once she seemed to catch it, her lips thinned, and she glared at him. "What do you want from me?"

"To help. You're hurt." He pointed at her leg. Once he earned some of her trust, he'd try to get her hair. As it was, she wouldn't let him near her, and he didn't see it happening anytime soon, either.

"Right, because you’re yelling and your charred skin with all your veins coming to the top like every other drow in this realm makes you what, a fairy princess?"

Drayden took an angry stomp forward. He clenched his teeth, trying to bite back words he knew he wouldn't be able to take back. He cracked his knuckles and took a deep breath, letting it out slowly, trying to regain some semblance of peace. She stood there and stared at him. "As I said, the feral is strong, but I have not turned fully. I wish you no harm." He took a step forward, and she stepped backward. She was going to run again. Drayden looked down at her feet, anticipating the moment she would flee. Mere seconds. He blinked at the same time, grabbing hold of her. He needed to immobilize the female. Glancing at the tree behind her, he used the blink momentum and pinned her between the bark and him.

Author Decadent Kane is an indie paranormal romance author with a pen name taken from a burlesque name generator and began her career on a dare...

The fae, magic, and mystical worlds of possibility are carved into her soul. When she writes her stories, she pours all of her heart into what they whisper. She's the kind of lady who will stare off into space to better understand her characters thoughts, listening to them speak their own version of the story.

She's a mother of two girls and several furbabies. She's engaged but has no intention of getting married.  Like most authors she's been writing most of her life and has dreamed of being an author since the 5th grade. When she writes, she writes to explore characters and a world first for herself. Then she revises, edits and publishes for readers.