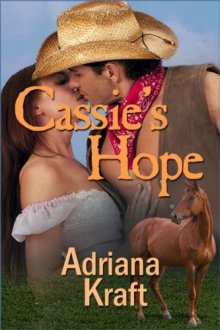 The lovely author team of Adriana Kraft is stopping over to share their latest book, Cassie's Hope.

WRITE WHAT YOU LOVE!

Cassie’s Hope, just released, is Book One in the series, and is our giveaway here at Night Owl Reviews. Set in the horse racing industry, the entire series is a labor of love, reaching back to before my husband and I ever met. We both grew up crazy about horses. His parents were Midwest dairy farmers, and when he was very tiny, they still used a team of matched Belgians to cross-check their cornfields at planting time, as well as to pull the stone boat when they picked frost-heave rocks out of the fields each spring. In his dad’s eyes, horses were for working, and once they switched completely over to tractors, his dad saw no need for a horse that might be used only for pleasure. But the seeds of the dream had been sown…

For myself, I grew up on seven acres, a remnant of a much larger spread, in what would have been the tenant farm house. I dreamed horses. I devoured King of the Wind, Misty of Chincoteague, Black Beauty, and anything else I could get my hands on. My parents even bought me books about identifying horse breeds, how to ride, and how to care for a horse. Much to my dismay and mystification, they never let me own one. Only as an adult did I come to understand neither of them had any experience with large animals, and probably none of us would have been prepared for what owning a horse would have involved.

It wasn’t long after my husband and I got together that we discovered this mutual passion. Living in Chicago, it was easy to get to area racetracks and follow the horses. We were at the Arlington Million the year the grandstands burned down, and we’ve watched races at Hawthorne, Sportsman’s (now closed), and Balmoral. We’ve been to the Kentucky Derby twice and the Belmont Stakes once, and we’ve thrilled to the historic grandstands and the oak-tree paddock at Saratoga, America’s oldest racetrack. We’ll be at Hollywood Park next week to help celebrate its final season before it, like so many, yields to the developer’s bulldozer.

We’ve also, for a brief time, owned horses, including thoroughbred and quarterhorse race horses. You can read more about them at this LINK.

Writing Riders Up has plunged us back into that world. We’ve set four romantic suspense stories in the heart of the thoroughbred racing scene, with possibly more to come. We hope our readers love the stories (and the horses) as much as we do.

What happens when a fiercely loyal widowed half-Ute cowboy meets a fiery redhead with an Irish temper to match? Cassidy O’Hanlon – Cassie, to her friends – has set aside her Chicago career for six months to train racehorses for her dad after his stroke.

Furious the interloper has shipped in a ringer from the Chicago circuit to his Wyoming turf, Rancher/trainer Clint Travers sets out to put her in her place. Sparks fly immediately, but after their rocky start, the two quickly forge a passionate relationship, and he follows her to Chicago.

When it becomes clear someone is drugging Cassie’s horse, Clint sets out to solve the mystery, but storms off in a cloud of wounded pride when suspicions turn to him.

Shaking her head, Cassie grabbed a hoof pick from her back pocket, lifted one of Hope's front hooves, and began extracting dirt and pebbles.

Cassie groaned at the strange deep voice and the too-familiar line. Couldn't men anywhere be a little more original?

Dropping the hoof, Cassie glanced across Hope's back and gasped. The deeply tanned hunk behind the voice had shoulders that stretched taut a pale yellow polo shirt covered, in part, with a thin buckskin vest. The wide cowboy buckle appeared unnecessary to hold up well contoured Levi's. A sweat-stained brown Stetson, tipped low, cast a light shadow across his facial features. His worn boots were those of a working man. This was no drugstore cowboy.

He stepped closer. She could make out a scowl. Dark eyes snapped a foreboding anger. Raven black hair framed chiseled features, searing them into Cassie's brain. Her toes curled involuntarily. She rubbed Hope's coat vigorously. Who the hell was he? And to top it off, he didn't even seem to notice her. His eyes appraised only the horse.

"Thanks," she mumbled, ducking down by Hope's flank.

The handsome stranger walked around the horse. "Very nice," he drawled at last.

Adriana Kraft on the web: